So why did Paul Girardin, his wife, Louise Bernardin, and their family move to Worcester, Massachusetts? Research indicates that they were not the only Quebec family to do so. According to the article French Canadian Emigration to the United States, 1840=1930 by Damien-Claude Belanger and Claude Belanger:

There were many economic reasons for this emigration movement. Life was hard in rural Quebec. The population was expanding at a faster rate than agricultural land could support. The New England states were an easy train ride from Quebec and wages in the U.S. factories could provide a higher standard of living for a family.

In the same article we learn:

“Often, the emigration of an entire nuclear family would begin with the departure of a couple of its members who would sound out the general situation in a given town and then would send for the rest of their family. Cousins, uncles and nephews would often join the initial family before bringing their own relatives down, creating a pattern of settlement where family ties became the primary source of support and information in the United States.”

In the book The French-Canadian Heritage in New England by Gerard J. Brault, we learn:

“Immigrants wrote enthusiastic letters home or, when visiting, forcefully pointed out the advantages of living and working in New England mill towns.”

“Some industries actively recruited labor from Canada, especially in the years immediately before and after the Civil War.”

Were Paul and Louisa encouraged to move by other family members? Were they approached by recruiters? I am still trying to piece together exactly when the various members of the families moved. It is a time-consuming process, searching census, marriage, death records and city directories, but one I confess to enjoy!

I have not, yet, been able to find Paul and Louise in the 1870 U.S. census, although I suspect they were there. The earliest record I’ve found is when their daughter Caroline Girardin married Pierre Hamel on July 4, 1871 in Worcester.

In the 1873 city directory for Worcester, we find Paul and his son Napoleon, who is listed as a shoemaker. By 1877, Napoleon’s brother Charles Girardin is also in the directory. Both Charles and  Napoleon are listed as working at 9 Barton Place. Further research revealed that 9 Barton Place was the address of H.B. Fay & Co. Bootmakers.

Shoe factories were a thriving business in Worcester. Hours were long and the work was tedious. Here’s a picture of a  factory in Lynn, Massachusetts in the 1870s. 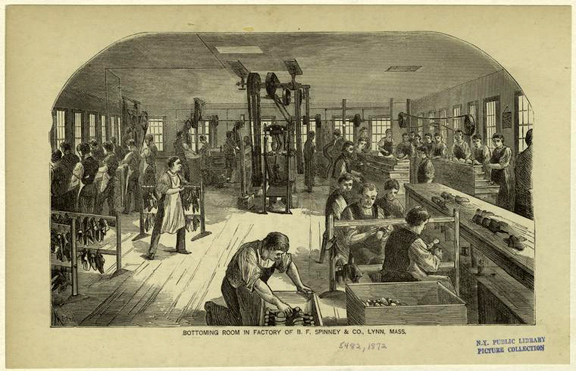 In terms of direct family history the most important event to occur was the marriage of Napoleon Girardin to Onesime Allard September 29, 1873 in Worcester.

Notice the spellings of their names on their marriage certificate…Jourdan and Allerd! French Canadian names were often mangled in census records and directories.

Onesime had been born 20 May 1852 in St-Denis-sur-Richelieu, Quebec. In the 1871 Census of Canada she was still living at home with her parents. I don’t know when or why she came to Massachusetts. Two of her brothers, Joseph and Frederic can be found in Massachusetts by 1877. That’s the year Joseph’s daughter Laura was born and Frederic married. Frederic’s wife died young, he returned to Quebec, married again and died there. Joseph remained in Massachusetts, also marrying a second time after his wife’s death. He died in 1920.

All three of Napoleon and Onesime’s daughters were dead by the time Mémère, Emma Girardin, was born 23 Jun 1878.

So, there you have the story of how Mémère came to be born in Massachusetts.  How did we end up in Manitoba? 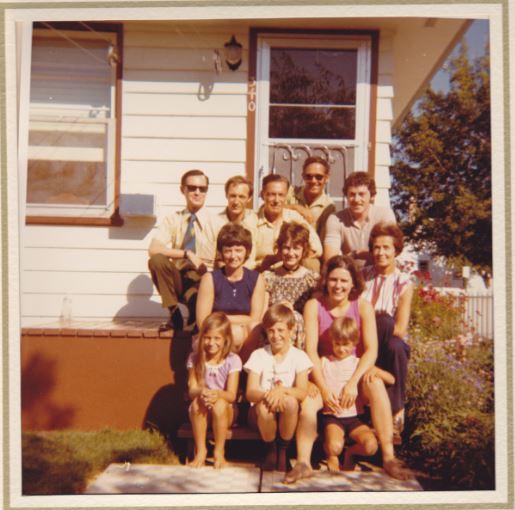 This is the last family group photo ever taken with my Dad in it.  It was August 22, 1971, the day after my wedding, and 11 months before Dad died.

In my last post, I wrote about Jean Baptiste Bernardin and Marie Charlotte Taillefer, and their life in Lower Canada. Our direct ancestor is their daughter, Marie Louise Bernardin, born 24 Sep 1824 in Nicolet, Lower Canada, and baptized at the cathédrale St-Jean-Baptiste.

I am again indebted to the research of Professor Charles Bernardin who wrote a book about her, Louise Bernardin Girardin: Manitoba Pioneer. Through the generosity of another Girardin descendant I was able to obtain a copy of this most interesting publication.

Economic conditions in Quebec were hard, and the family struggled as Jean Baptiste supported his family with farming, and as a tailor. He was forced into bankruptcy in 1841, and the family moved to William-Henry (Sorel). By this time, they were also dealing with the death of three infant children. In 1844, after finally receiving compensation for losing his Grantham property, Jean Baptiste was able to purchase property in the village of Kingsey, where he lived and kept his tailor shop, as well as 126 acres of forested land outside the village.

As Professor Bernardin states:
“Although Kingsey was even more remotely isolated than Drummondville from the St. Lawrence River, living and farming standards were upgraded: the Bernardins now lived in a plank house; they now cooked over a stove, not a fireplace; and now owned a horse again, a barn, and other farm animals and fowl. The virgin soil improved their production of potatoes and other crops.”

It was in Kingsey that Louise married Paul Girardin on 15 Feb 1847. Paul had been born 14 Oct 1804 in Maskinonge, Quebec, to Charles Girardin and Josephte Lesieur. (I wrote about the Lesieur family here). Louise was 20 years younger than Paul.

Sometime after the birth of their youngest child, Paul and Louise made the decision to move to Massachusetts, a story I will continue in my next post.

My next posts will be about my Girardin ancestors. I’m starting with the fascinating story of Jean Baptiste Bernardin. He was born to Francois Bernardin and Anne Marguerite d’Autel on January 23, 1784, in the village of Ruaux, in the department of Vosges, in the region of Lorraine, which is in the northeast part of France.

Here’s his baptism record, as shown on the Fichier Origine website.

One of his descendants, Professor Charles W. Bernardin of Pennsylvania has written several books about him:

I have not been able to track down copies of these books, but only summaries of them. According to the professor’s research, by 1806 Jean Baptiste was a soldier in the 9th Regiment Light Infantry of Napoleon Bonaparte’s army. You’ve heard of Napoleon (if not, read about him here ). And for an entertaining look at the Napoleonic wars, track down the old Sharpe TV series starring Sean Bean!.

Jean Baptiste would probably have been conscripted into the French army, as that was the norm at the time. In 1808 he was transferred to the 33rd Light Infantry Regiment. This regiment fought in Spain and lost at the Battle of Bailen, in July 1808. Almost 18,000 soldiers were taken prisoner, Jean Baptiste among them. Although the Spanish had promised to repatriate them to France, they did not keep their word. Instead, the prisoners were held in “prison hulks”, decommissioned ships anchored in the harbour at Cadiz. According to a notation in the book The Laws of War: Constraints on Warfare in the Western World by Michael Howard et al, only one in ten of the prisoners survived!

After 9 months as a prisoner, Jean Baptiste was offered the opportunity to join the Swiss Regiment de Meuron. This Regiment was originally created to serve under the Dutch in India. They were later transferred to the service of the British (something to do with the Dutch not being able to pay them). The Meurons were fighting for the British in the Peninsular War in Spain. It was not uncommon for prisoners to be recruited for another country’s army. I’m certain that decision was easily made, considering the appalling conditions of the prisoners! Thus, despite the “Swiss” moniker, the Regiment de Meuron was a multi-national unit and included Germans, Italians and many other nationalities.

As a soldier in the Meuron Regiment, Jean Baptiste was sent first to Sicily, and then to Canada to fight for the British against the Americans in the War of 1812 – 1814, arriving in Canada in June of 1814. Interestingly, he fought in the Battle of Plattsburg, where my great-great grandfather Amable Hogue also saw action and was wounded.

Jean Baptiste survived, and must have found Lower Canada, as Quebec was known, amenable, because on February 12, 1816, he married Marie Charlotte Taillefer. Here’s his signature on their marriage record.

When reviewing the marriage, which took place in Montreal at Notre Dame, I realized that two other soldiers from the Meuron Regiment were married that same day, in the same church. They were Francois Sabolle and Pierre Carre, both originally from France. Perhaps they had also been prisoners in Spain.

After the war, the soldiers were given 100 acre land grants if they opted to become citizens. Jean Baptiste settled at Grantham in Quebec. Settlers were required to clear their land, build a cabin and live there for 3 years before they could apply for a patent. Besides farming his land Jean Baptiste was also a tailor. Thus, in 1819 he moved to Nicolet intending to make money as a tailor before returning to Grantham. Unfortunately, by 1822 he was to discover that the British officers in charge of the settlement had decided he had abandoned his property and gave it to someone else! Jean Baptiste petitioned for redress, but it took until 1844 before he was awarded a small amount of money as compensation.

Meanwhile, harsh economic conditions led to the family moving to William-Henry (now known as Sorel) in 1841, and finally settling in Saint-Felix de Kingsey in 1844. Here’s a Google map that shows the places mentioned above. The red blob is Kingsey. 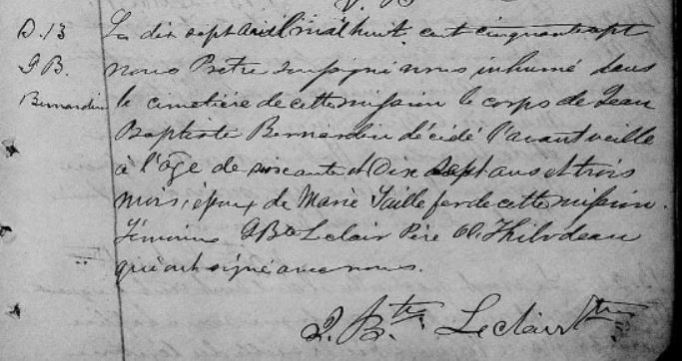 In the 1861 and 1871 censuses, the widowed Marie is living with her daughter Elyse and son-in-law Joseph Hamel. She died May 8, 1872 in Warwick, Quebec. Here’s her burial record.

Love the fact that French-Canadian records use women’s maiden names!
And here’s our descent from Jean Baptiste to Mémère: