I should never prepare a post first thing in the morning and post it right away.  Sigh.

Last Sunday, July 16th, I posted about how it was my brother’s birthday AND the anniversary of my Dad’s death.

I was wrong.  I realized it mere minutes after I clicked on Publish.  However, email followers received the message right away, before I recognized the error and deleted the post.

If my brother Don was still alive, he would be celebrating his 80th birthday today, July 18th.  Sadly he died in January.

Here’s a picture of Don, Mom, and Dad at Niagara Falls.  I’m pretty sure this was the summer of 1970. 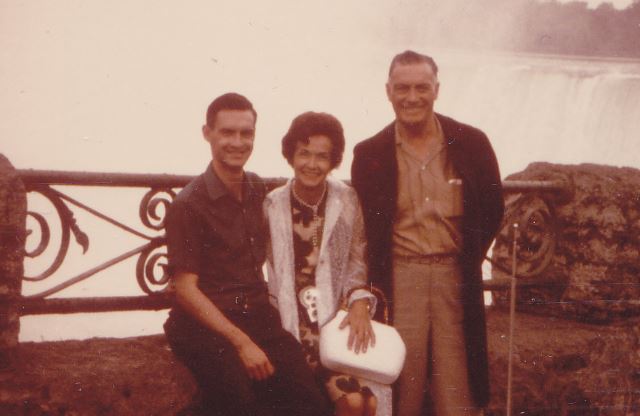 Happy times.  Miss you all.

Today Canada is celebrating 150 years of Confederation. Confederation was the political union of the provinces of Ontario, Quebec, Nova Scotia and New Brunswick. However, my ancestors have been in this land much longer than 150 years.

In Winnipeg, where I live, archeological digs at the Forks of the Red and Assiniboine rivers confirm that it has been a meeting place for aboriginal peoples for 6,000 years (you can read about that here).   I have three Metis ancestors, Jane Taylor, Josephte Belisle, and Genevieve Beignet.  Lack of documentation means I can’t trace these aboriginal roots any further back than the late 1700s.

As I have written before, I have many ancestors who were involved in the fur trade, which was a major economic driver in the settlement of the country.

My ancestors are mostly French-Canadian and go back to the early 1600s and the settlement of New France. I’ve blogged extensively about their lives.  Like all countries ours is a country with a colonial history. One can find many instances of racism, wars, and injustices, especially dealing with the treaty promises that were not honoured.

We are an imperfect country, and we shouldn’t gloss over our failings. But today let’s look around the world, and realize how lucky we are to live in a wealthy, democratic country, with freedom of speech and a belief in human rights.