This is the last in a series of posts about Mémère’s (Emma Girardin) siblings.

Florent Girardin was born August 25, 1892. He was 4 years old when his mother, Onesime Allard, died. He married Marie Louise Marcoux on November 9, 1921. They had 8 children, one of whom died at birth.

Florent was a member of the First Depot Battalion, Manitoba Regiment, during World War Two, but did not serve overseas.

He farmed in La Salle and later in St. Norbert, Manitoba.

There are a couple of pictures of him in the La Salle history book, Then to Now.  I won’t post pictures that I don’t own, or haven’t received permission to share.  However, comparing those pictures to one I have, I THINK this is Florent.

Mémère’s youngest sibling, Caroline, is very much a mystery to me. She was born July 22, 1894. She was only 2 years old when her mother died. In the 1901 and 1906 census records, she is at home with her father in La Salle. In 1911 she is living with Mémère and Pépère, and works as a house servant in a boarding house.

And then she disappears! I can find no marriage or death records for her. At one point I thought she had married, but that record turned out to be her aunt, also called Caroline. There are public trees on ancestry that give her death as 1936, but none of these trees have documentation for that date.  She remains, for the time being, my “brick wall”.

And what of Mémère’s father, Napoleon? So many changes in his life! To recap, Napoleon was born in 1851 in Kingsey, Quebec. He moved with his extended family to Worcester, Massachusetts where he worked as a shoemaker, and married Onesime Allard.

Their first three children all died young. In 1880 with their daughter Emma (Mémère), they moved to Manitoba where Napoleon’s mother (Louise Bernardin) and brothers had already settled. They lived first in St. Daniel, then Bruxelles/St. Alphonse and had another nine children before Onesime died in 1896.

Napoleon moved his family to La Salle. He farmed, and most of the children married. In 1922, at the age of 71, Napoleon married again, to Marie Rouleau, who was the widow of Ferdinand Rheault. And here’s one of those strange connections we sometimes find. Marie was actually the mother-in-law of Napoleon’s younger brother Simeon, who had married Marie’s daughter Helene!

Napoleon died May 16, 1929 and is buried in La Salle, although apparently his grave is unmarked.

As is so often the case, even this “official” document has errors.  Napoleon was definitely born in 1851 in Quebec, not 1852 in Massachusetts, as evidenced by the baptismal record in St-Félix-de-Valois parish in Quebec.

I’ve never seen a record where Napoleon’s father, Paul, is called “Adelard”.  The maiden name of his mother was Louise Bernardin.  Charbonneau was her name after her second marriage.  But these are the sometimes inaccurate details that you find when you research.

I THINK Marie Rouleau died in 1941, and is buried in Elie, Manitoba.

Now if I could just track down the elusive Caroline!

In a previous post here, I mentioned the untimely death of Mémère’s mother, Onesime Allard, in 1896. Mémère’s father, Napoleon Girardin, was left with 10 children, the youngest, Caroline, only 2 years old, and the oldest, Emma (Mémère), a month shy of her 18th birthday. Onesime was buried at Bruxelles, but at some point the body was interred in another cemetery where other Allards were buried. I suspect that may have been St. Francois Xavier.

Napoleon was offered a position at the St. Hyacinthe seminary college farm in La Salle, and moved the family there. In the book Hugging the Meridian: Macdonald: A Manitoba Municipal History 1881-1981 by Betty Dyck, Emma was interviewed and recalled:

“We came by horse and wagon. Mr. Joseph Cormier made us a bed for the night on straw. The next day he took us to the college farm. When I married Thomas Hogue I moved to La Salle town April 16, 1907 to where the house is now on the Main Street.”

In the 1901 Census for La Salle (Macdonald, Selkirk, Manitoba; Page: 9) the Girardins are family #76 and the Hogues are family #77. It’s easy to understand how three Girardins married three Hogues!

Obviously Emma had a great deal of responsibility for her siblings. However, other descendants of Napoleon and Onesime have related to me that some of the siblings were sent to either an orphanage or convent or boarding school. This may have been an institution run by the Grey Nuns in St. Boniface, in the building which is now the St. Boniface Museum (see here). Or it may have been St. Joseph’s Academy run by Sisters of the Holy Names of Jesus and Mary (see here).  I have not yet been able to track down any records to document this.

So who were Mémère’s siblings?  I’ll begin a series of posts to share what I have learned.

The first was Arthur, born August 2, 1880 in Winnipeg almost as soon as Napoleon and Onesime arrived. Arthur was almost 16 when his mother died. He married Sarah Hogue (daughter of Thomas and Philomene) in 1901. Arthur worked as a foreman for the Canadian Pacific Railway. They had a family of six. Here’s a picture of them later in life. 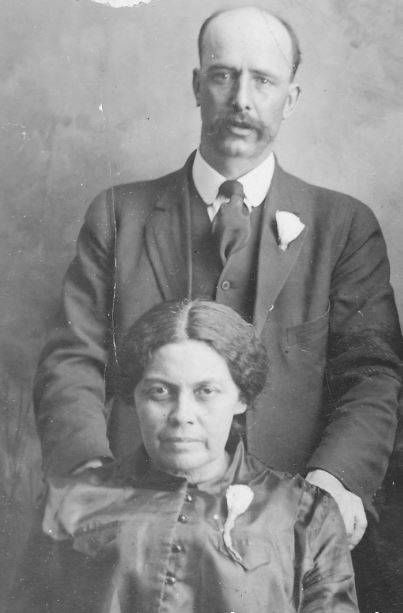 Arthur died December 14, 1955 and Sarah on February 23, 1960. They are buried in the La Salle Cemetery. As you can see from the gravestone, two of their children died young. 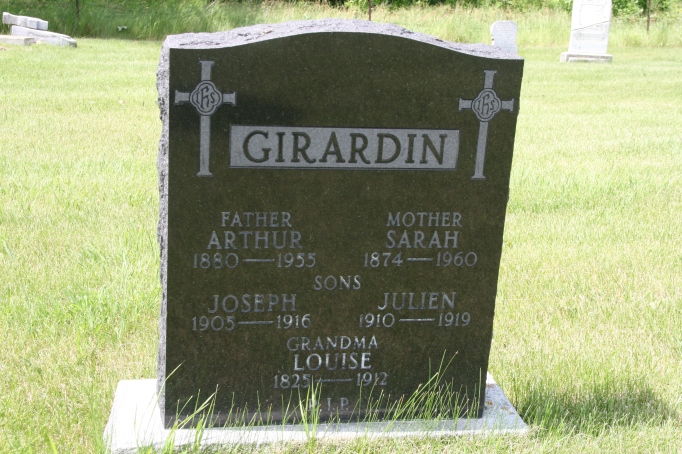 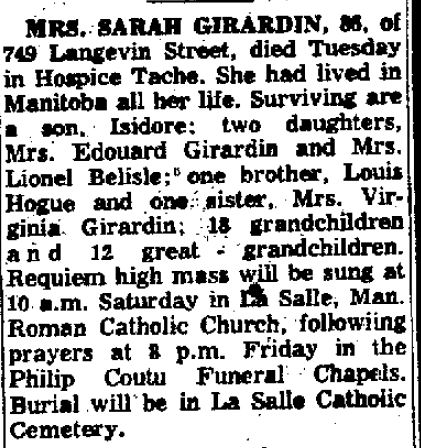 I’ve had the pleasure of meeting two of Arthur and Sarah’s granddaughters, who have generously shared information and photos with me.